Freedom and Its Betrayal: Six Enemies of Human Liberty is a collection of six remarkable lectures (as edited by Henry Hardy) that Isaiah Berlin delivered on BBC Radio in the autumn of 1952. They are an impassioned political interpretation of what Berlin sees as the authoritarian legacy of six philosophers: Helvétius, Rousseau, Fichte, Hegel, Saint-Simon and Maistre. In response T. S. Eliot offered a left-handed compliment to Berlin's "torrential eloquence" and the philosopher Michael Oakeshott called him a "Paganini of ideas". Hundreds of thousands listened to the series and Berlin received many enthusiastic letters.

Berlin had first treated this material earlier in the same year, when he delivered the Mary Flexner Lectures (at Bryn Mawr College in Pennsylvania) under the title "Political Ideas in the Romantic Age". Lelia Brodersen, who was briefly his secretary during his residence at Bryn Mawr, was present at the lectures. She would remember the "furious stream of words, in beautifully finished sentences" from the professor who in a "true state of inspiration" drew his distinctions between various forms of freedom.

He had prepared himself with great energy for these lectures. According to his biographer Michael Ignatieff, in 1950-1 Berlin "read furiously" the works of the eighteenth-century French philosophers (Diderot, Helvétius, Holbach, Voltaire) and the German Romantics (Schelling, Herder, Fichte). But perhaps the "fury" to which Ignatieff alludes had less to do with Berlin's academic commitment than with the sense that he was beginning to find his personal vocation and his own voice for a confrontation with history.

Translated from the Spanish by Hank Heifetz 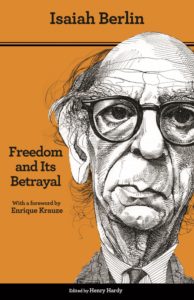 Buy on Amazon or Princeton